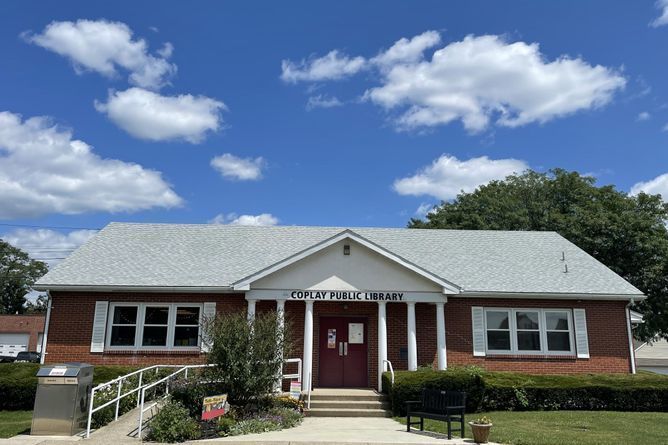 Located in the Lehigh Valley, the Coplay Public Library serves the people of the Borough of Coplay, the Whitehall-Coplay School District, and surrounding areas. We like to think of our library as “a small building with big ideas!”

Thanks to state aid, taxes, fundraising, and grants, we have been able to upgrade to a new computerized system that allows us to quickly catalog new items to make them available to you sooner. The new system also provides a more comprehensive catalog, so you're able to search for items at our library and all libraries within our library cooperative. It even keeps your information private: ONLY YOU can access your circulation history using your library card number and personal pin.

We offer many programs and services:

At one time, Coplay was served by the Lehigh County bookmobile. When the service was discontinued, Coplay's citizens decided to create a library of their own.

A board of trustees was selected, and officers were elected at an organizational meeting in November 1961. Operations began in February 1962 at the new Coplay Public Library, located at the corner of 2nd and Center Streets.

When it became apparent that the library was quickly outgrowing its facilities, the trustees and Borough Council developed plans for a larger and improved new building.

The current facility, built at the cost of approximately $70,000 on land procured from the school district, opened in June 1970. While the Borough largely paid for the building, special gifts from other sources also went toward the costs of construction.

Current funding for the library comes from multiple sources, including a dedicated tax referendum adopted by the voters of the Borough of Coplay, the Commonwealth of Pennsylvania, local organizations, and gifts and donations from people like YOU.

The mission of the Coplay Public Library, a community public library, shall be to provide educational, informational, and recreational print and electronic resources to the people of the Borough of Coplay and surrounding areas.